What have you done to your bike today?

Filled my tires and took it out for a trail ride.

Kaleidopete said:
Since my new dropper post took a $hit, I reverted to old school controls.
Click to expand...

Is that a convertible seat (ragtop), or missing parts?

Team MTBNJ Halter's
Finally finished building my latest hard tail. They always start with “I almost have enough spare parts to build another bike”, but end with $$$.

This thing weighs sub 21lbs with Valors, racing R and Rs, and no dropper. For an XL. 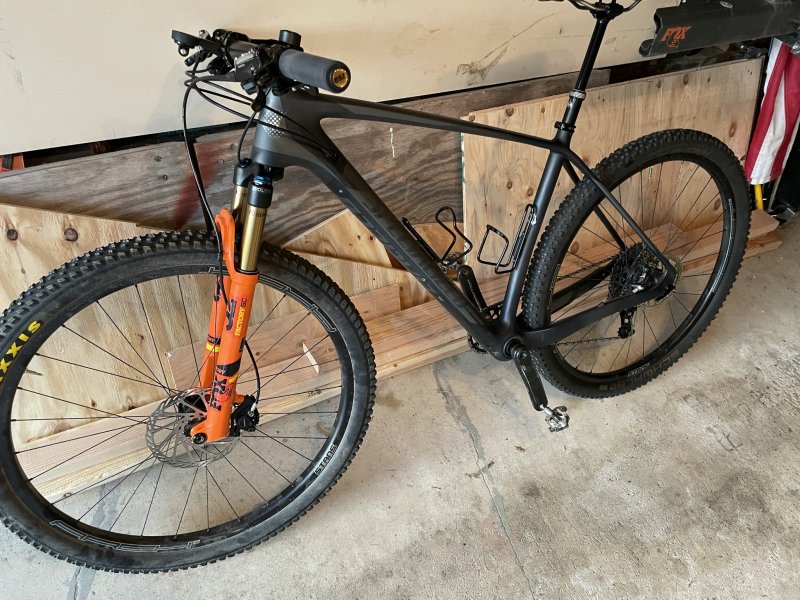 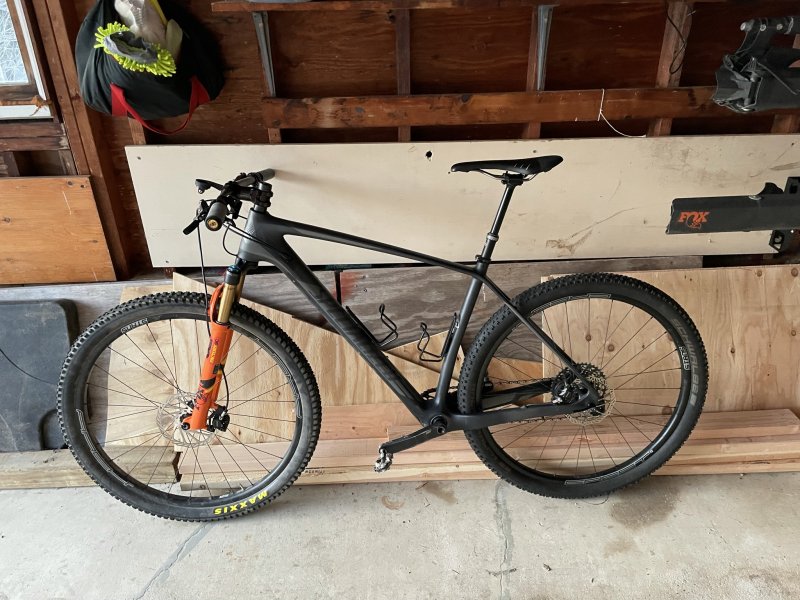 Is that a convertible seat (ragtop), or missing parts?
Click to expand... 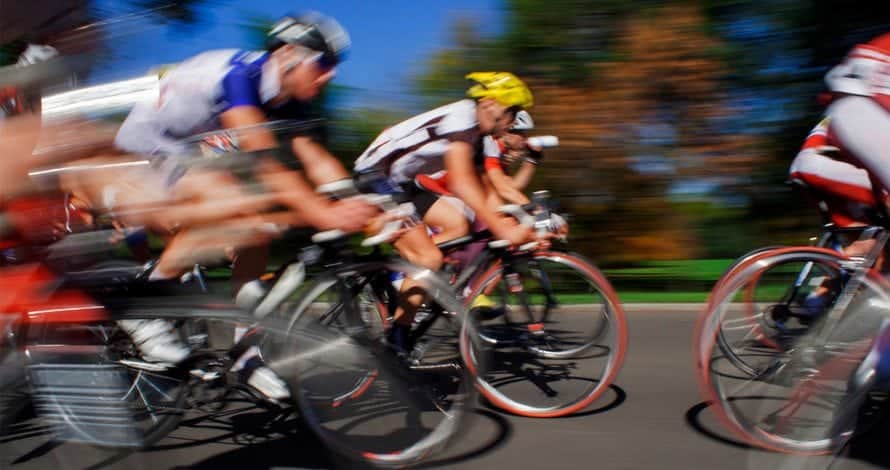 Wow. I thought that’s what I was looking at, but my brain said No.

Best seat I ever rode, butt, I still get a saddle sore now and then. (see what I did there) 😊

one piece crank said:
Wow. I thought that’s what I was looking at, but my brain said No.
Click to expand...

Kaleidopete said:
Best seat I ever rode, butt, I still get a saddle sore now and then. (see what I did there) 😊
Click to expand...

Man, if you don't like the looks of that, you should see what it looked like when the owner was shopping it around (think Tioga saddle with the spider web cut out).

It was a hard pass from me, but I respect that he not only tried, but carved out his niche.

Whelp, I spent the lovely day inside working on three things (okay, maybe 4): 1) putting a pot of pizza sauce on to cook in the morning (bird's eye pepper, onion, garlic, basil, oregano, thyme); 2) making enough bread for a couple of weeks--and using two wildly-too-small loaf pans for two of the four; 3) finally refreshing the sealant in the road bike, since the wheels were sitting under the vise that I needed for; 4) working on the 'touring' bike, my misbegotten Trek 850 (no typo). After putting on some expensive 2.3" tires (which clear the frame with no problem!), I realized two things. The first, easiest remedied thing was the fender mount at the chainstay bridge--it sat a bit too close for comfort, so I removed a spacer, and cut down a new screw to mount it nice-and-flush (hence the need to actually move and finish dumping out/replacing sealant in the wheel sitting under the vise). The second thing was a bit more insidious. The 850 was an EARLY mountain bike, and while it has gobs of tire clearance (easily 2.4-2.5 inches with room for mud), the rear end is only 130mm. This turned out to be a problem with the slightly larger tire, since the chain now rubbed it in the granny gear.

[Aside: is anyone else bothered that the bicycle industry has no problem switching wholesale between metric/imperial without a second though?]

Well, two options were available to me: re-set the rear end to 135mm (not a problem, done it before...but didn't want to screw with a frame that is actually hard to come by, nor re-dish a hub), or modify the crank. Since the cranks (and tires/etc) are eventually going to find their way onto another frame with some modifications to the setup, I decided to start heading it off at the pass now. I removed the middle ring from the cranks, moved the 44 (to be replaced with a 40, eventually) to the middle position, and spaced the bottom bracket out 2mm temporarily (not replacing it for a frame that is on borrowed time). While I was at it, I replaced my rear derailleur cable that I had half-assed tied a square knot in to lengthen it [full disclosure: I full assed it, as it is a proper union splice for wire, not a granny knot, and the loose ends were crimped next to the splice], since the random kinks in the cable were playing hell with the indexing gear I had.

I don't hold any grudge against the weather, though. It was nice to work with an open door, and I needed a rest day, anyway.

Since my new fancy blue valves are not coming until Monday/Tuesday I opted for a temporary fix and install an old brass valce on the light blue el mariachi front wheel. There was a micro leak at the rim seam, even though there wasn't when I first seated the beads, but it eventually stopped. The bike is now again fully functional.

Yesterday I mounted the spare set of original wheels for the white SS el mariachi with Vittoria Metzcal, then they went on the bike to replace the other set of original wheel mounted with Ikons. They're both 2.35"but the Vittoria look 1/3 smaller than the Maxxis. Industry standards, what a joke! The idea is that thee tires should be more road worthy, so now this officially my road bike...

Busy schedule ahead, complete the first ride on the light blue el mariachi that was interrupt abruptly last week, test the new 'road' tires and the 12 speed Shimano setup on the fugitive.., this could take me a month or two! 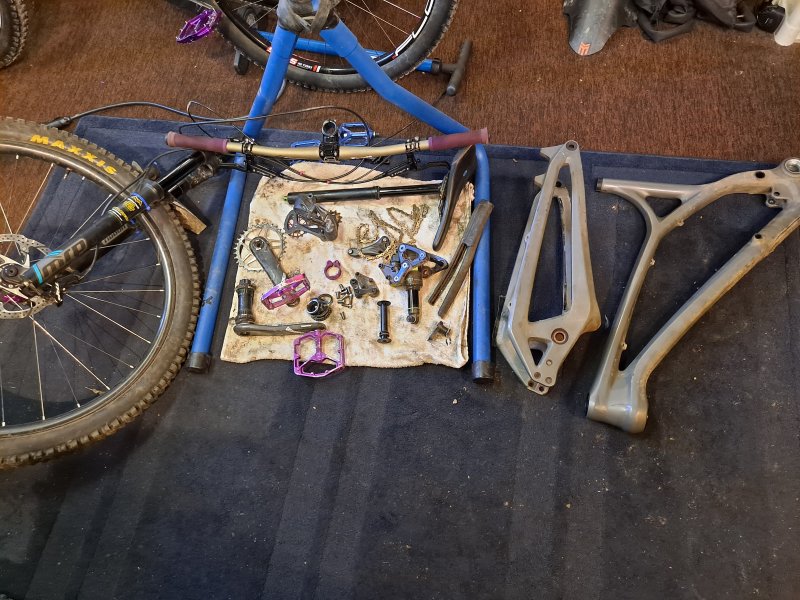 Finally got out for a ride at Kresson trails in Cherry Hill!!! 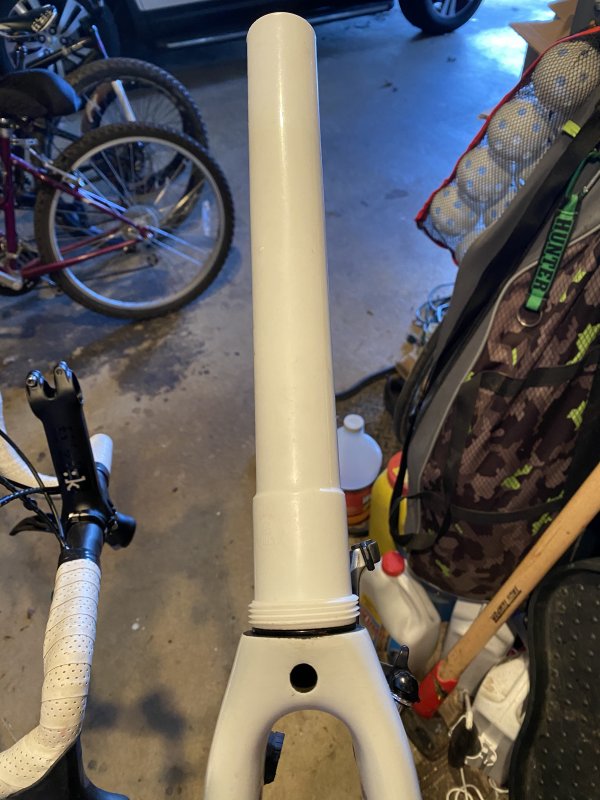 Right tool for the right job, as my Dad has often said.

I may have one, and have reason to use!
good timing

Patrick said:
I may have one, and have reason to use!
good timing
Click to expand...

Endurance Guy: Tolerates most of us. 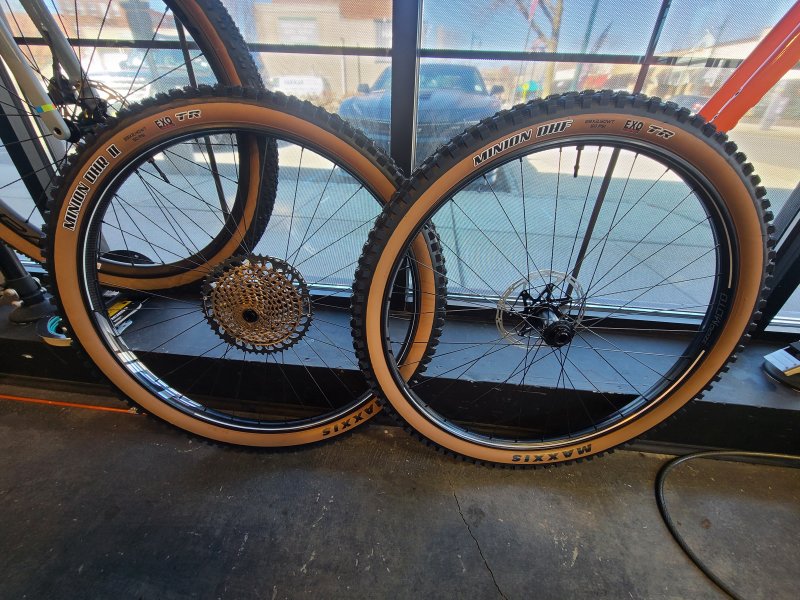 So I found this this just lying around some old shop's basement. I figure, maybe i'll make a bike out of it or something. Rockshox Zeb and 27.5x2.8 Minions should fit, right? Trying to use what's on hand... 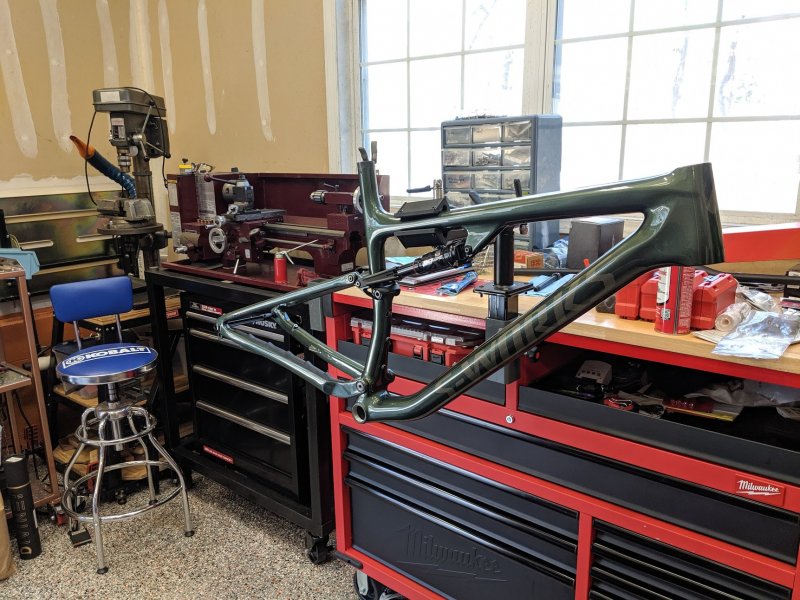