The White Pipes of Sterling

I'm sure that just about everybody who has ridden in Sterling Forest has noticed the 12' high white PVC pipes on the side of the Munsee-Eagle trail. There is also one somewhat hidden on the side of Hutchinson. In the winter when there are no leaves you can see quite a few more in the woods if you look carefully. You also might have noticed that some have green rings around the top and some are blue.

So why are they there?

Lets start with the recent history of the area. Late 90's early 2000's. What we now know as Sterling Forest was privately held land that the owner(s) of which was actively tooking to develop. A few transactions occurred building most of the park and in 2006, the land around the Caretaker Parking lot was one of the last parcels that was acquired by the State of New York. This 575 acre parcel became know as the Donut Hole during that process because the privately held parcel was completely surrounded by the State Park at that point.

Sterling Corporation, the previous owner, had planned to develop this parcel as an exclusive gated community that included an 18 hole golf course. They made extensive plans including surveys and preliminary engineering for this developemnt. The white pipes are part of that plan. They are survey markers. They are marking the tees and holes of the planned golf course. I think the blue pipes mark the tees and the green pipes mark the greens. Some of the pipes are missing. They were held up by green fence posts. There is a green post on the side of Hutchinson in one of the fern patches. There is also one on Munsee Eagle kind of close to the power line.

So wouldn't it be cool to know which pipe is which hole or tee and the Par/Distance on the tee's? Stay tuned, its being worked on.

The trail does have some water hazards. But becoming fewer and fewer. 2 of the last 4 big ones are being fixed right now. 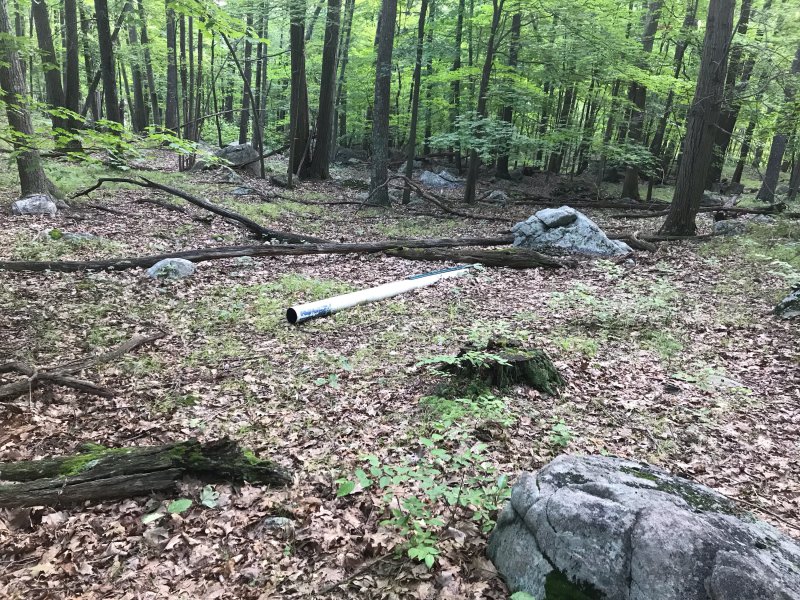