Help me fix my squeak! This has been bugging me for a long time. I get a squeak, like an old swing set, only while pedaling, and usually
only when the left crank arm is down. The faster I pedal the faster the squeak.Usually every rotation. I have tried spray lube by the seals. Heavy spraying
seemed to fix it for a mile or so, but it soon returned. Could be that
was a coincidence. It squeaks 90% of the time. Hot or cold doesn't matter. It is not a wheel rotation squeak. Last week I had the LBS install new bottom bracket, Surly makes it a whole kit. See photo. Seals bearings spacer, the works. I still have the squeak. Today I thought I’d attack it myself, so I took the crank arm off and inspected it. Inside near the spline on the arm I saw a silver gouge in the black paint that was also deep into the arm itself. I thought that was it, so I filed it smooth and repainted it black. Put it back on and still the squeak. I removed the arm again and added another seal upside down so there were now two seals, and reinstalled. Still the squeak. I adjusted the bearing pre-load very tight and tried that. Still the squeak. I adjusted the bearing pre-load way way loose. Still the squeak. I had the pre-load so loose I could move the crank arms at least 5MM in either direction. Still the squeak, whichever way I moved the arms. It’s NOT the pedals either, I replaced them, still the squeak. Has anyone ever had this or have any other suggestions? 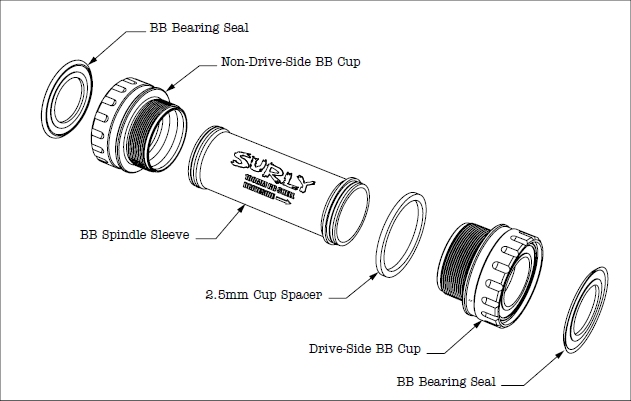 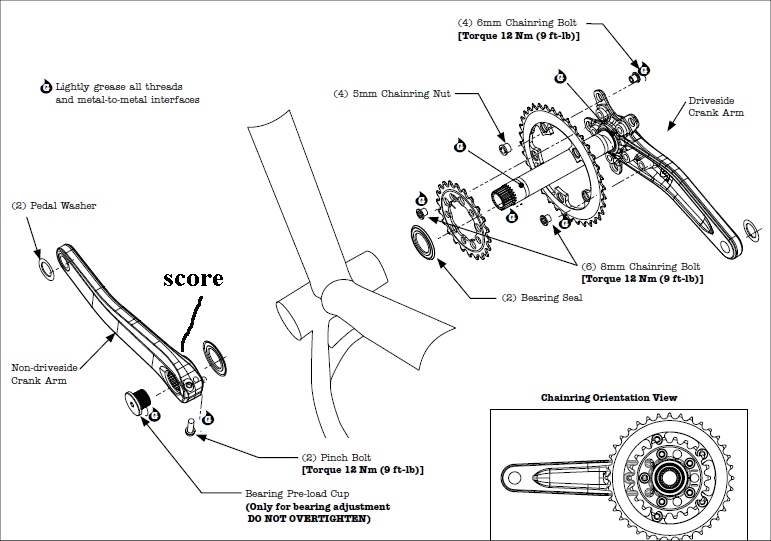 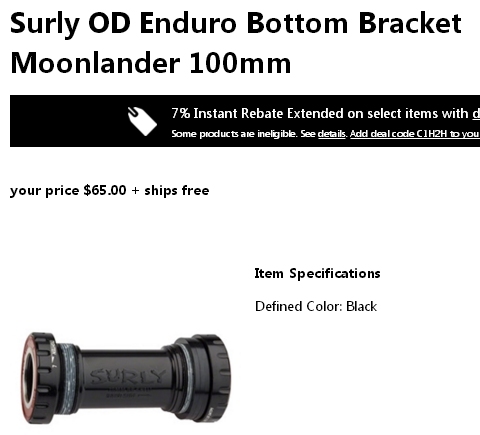 You sure it's not coming from the pedals?

Could it possibly the two different metals mating between crank and bb? Possibly grease bolts holding crank on.

C8N said:
You sure it's not coming from the pedals?
Click to expand...

Right, I replaced the pedals and still have squeak

Mtbdog said:
Could it possibly the two different metals mating between crank and bb? Possibly grease bolts holding crank on.
Click to expand...

Grease all of the things.

Does it squeak when you pedal standing up?

Does it squeak when you pedal sitting down, with no hands on the bars?

I had the same problem, I took everything apart and the squeak didn't go away, took the bike to the shop and the squeak believe it or not came from the derailleur, the mecanic took the whole derailleur apart clean it and no more squeak.

Could it be coming from the chainring to crankarm interface?

Team MTBNJ Halter's
Qr Skewers and or chain ring bolts. Those were squeaks that took me a while to figure out

Kaleidopete said:
Right, I replaced the pedals and still have squeak
Click to expand...

Well... the one fix all solution.
A new bike!

Staff member
does it squeak soft pedaling on a downhill? (pedaling but no load)

i'm in for saddle or chainring bolts.

Another + for saddle, chainring or seat post in frame needs cleaning/lube.

Thanks for all the great suggestions, I'll be working today for sure.

Yeah I think a total tear down and grease everything will probably get it. Does it squeak while it's on fire?

Team MTBNJ Halter's
Wow, not one correct response!. Replace your left Knee. You are old, like myself, thats what happens to us.

Also check your pedal bearings and and rear hub.

Mitch said:
Wow, not one correct response!. Replace your left Knee. You are old, like myself, thats what happens to us.

Also check your pedal bearings and and rear hub.
Click to expand...

I can confirm this. Although not as old as @Mitch, I replaced my left knee 3 weeks ago and the squeak is gone

alex_k said:
check the saddle as well I almost replaced everything before figuring out that was my saddle
Click to expand...